LOUISVILLE, Ky.—April 21, 2016— GE’s FirstBuild™ has announced the winning designers of its new Pique™ Coffee Brewer through its Cold Brew Challenge: a product design competition drawing upon the power of crowdsourced design and the FirstBuild community. Nearly 50 entries were submitted for Pique, which is expected to go to market this summer on Indiegogo, the world’s largest crowdfunding platform. Pique has the capability to make a full pot of rich, deeply flavored cold brew coffee in under 10 minutes, a 98 percent reduction in brew time.

For the first time, FirstBuild is offering 1 percent of the campaign funding from Indiegogo to be shared by the winning designers, up to $30,000 in total awards. While the amount of funding varies and there are no guarantees, FirstBuild’s most recent Indiegogo campaign for its Opal Nugget Ice Maker received more than $2.77 million in funding. 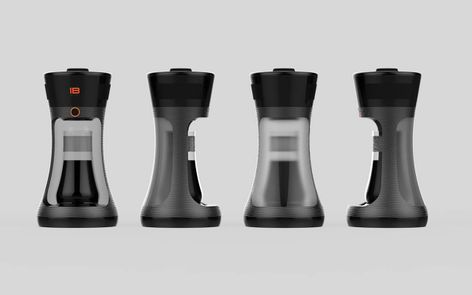 First place winner in the challenge was Nick Allen of San Francisco for his “Pique” design, an elegant hourglass form with a simple and intuitive user interface.

FirstBuild, which embraces the brainpower of the maker movement at its Louisville microfactory and around the globe, challenged makers to show off their extraordinary industrial design capabilities and user-experience insights. Entries were developed using Autodesk Fusion 360, a product development tool that brings together design, collaboration and fabrication in a single platform.

“We had so many great entries from our community members,” said Taylor Dawson, product evangelist at FirstBuild. “It demonstrates passion for bringing a cold brew product to market. The FirstBuild community has a track record of creating the kind of products that consumers want.”

The winning designers are also eligible for a portion of the earnings of the upcoming Indiegogo campaign.

“It’s like no other challenge I’ve ever seen before,” said Nick Allen, first place winner of the challenge. “The opportunity to collaborate with FirstBuild’s engineers to create a real product was a big plus for me.”

But why wait? Like the Opal™ Nugget Ice Maker and the Monogram® Pizza Oven before, the minds at FirstBuild have helped tackle a kitchen conundrum with the power of technology.

“Interest in cold brew coffee has grown exponentially in the last five years. Pique is positioned to serve a passionate existing customer base looking for a better cold brew experience,” said Dawson. “FirstBuild’s co-created products are on the leading edge of the appliance industry. It’s that collaborative approach that continually results in fresh thinking.”

To learn more and receive updates on the Pique Coffee Brewer, visit piquecoldbrew.com.

About FirstBuild
GE’s FirstBuild is a global co-creation community that harnesses the brainpower of the maker movement to change the way major home appliances are conceived, designed and manufactured. A physical state-of-the-art microfactory on the University of Louisville campus and online forum, FirstBuild speeds products from mind to market and enables customization through small batch production, without the costs and risks of traditional mass manufacturing. For more information about how to get involved, visit FirstBuild.com.