LOUISVILLE, Ky. —June 23, 2014—Simplifying, downsizing or the less-is-more movement—call it what you will—has millions of Americans from Millennials to Boomers seeking smaller living quarters. According to the U.S. Census Bureau, the urban population in the U.S. grew 12 percent from 2000 to 2010, totaling 81 percent of the population.1 As cities grapple with housing shortages, the trend toward smaller living spaces is already a reality. Shrinking living spaces necessitate products and services that simplify, optimize and economize. GE (NYSE:GE) Appliances’ new micro-kitchen concepts keep consumers living large in a drastically smaller footprint.

“As we watch what’s happening in the U.S., there’s a clear trend toward smaller, more efficient living spaces,” said Lou Lenzi, director of industrial design for GE Appliances. “There will always be a need for larger appliances for existing homes; however, we can’t ignore the growing need in urban environments. GE Appliances is excited to tackle the design challenge of creating micro-kitchen concepts that help people maintain or enhance their lifestyle in substantially less square footage.” 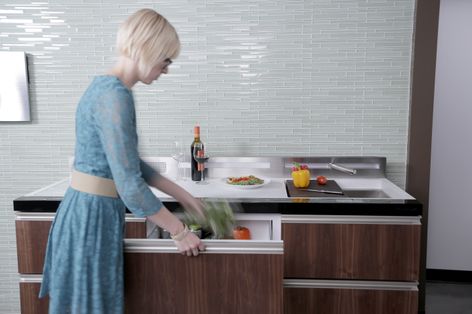 One of GE’s micro kitchen concepts – dubbed the monoblock – is an integrated unit with cooking, dishwashing and refrigeration in a single standalone enclosure that would become a seamless part of the cabinetry.

Why smaller?
Many factors are playing a role in the trend toward smaller dwellings. As the cost per square foot of real estate in metro markets increases, some people are choosing smaller dwellings out of necessity. In the U.S., there are 32 million one-person households as of 2012 and that number is expected to grow.2 Also contributing are demographic shifts, such as the aging of the U.S. population; downsizing Baby Boomers; the changing employment picture for Gen Y; younger people delaying home purchases preferring to rent; and trends toward simplification and a more environmentally friendly lifestyle.

“Boomers will have a huge impact on smaller living and it's GE’s bet that they won’t want to lose any of the luxury or convenience they’ve had in their lives,” said Lenzi. “Whether they need a micro kitchen for their downsized dwelling, vacation home, refurbished man cave or boat . . . Boomers have always wanted the best.”

From concept to reality
GE’s unique position in the appliance industry—the first manufacturer to have its own microfactory production facility located in Louisville, Ky., called FirstBuild—will enable the company to quickly prototype, make and sell small batches of the micro kitchens in late 2014.

“Through FirstBuild and its global online community, GE Appliances is able to create, design, build and sell new innovations for your home faster than ever before,” says Venkat Venkatakrishnan, director of R&D for GE Appliances and mentor for FirstBuild. “We launched a micro-kitchen challenge in May, and everyone from enthusiasts to experts can join FirstBuild.com to contribute their ideas to make the concepts a reality.”

While the FirstBuild co-creation community will be collectively creating the first designs, Lenzi’s industrial designers have also been imagining concepts delivering the power of full-sized appliances in a pint-sized package.